Here’s one of those funny, the singular form is is also the plural, words I particularly enjoy.

The word “moose” came to us from Algonquian Indians. Consequently
its plural, instead of being “mooses” or “meese”, is the same as the
singular. That is true of most Indian names whether of a tribe, such as
the Winnebago and Potawatomi, or of an object such as papoose. It is
also true of many wildlife names not of Indian origin — for example:
deer, mink and grouse. 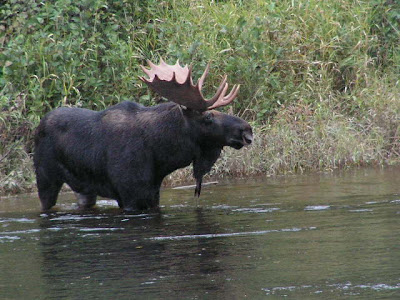 Moose are the least social species among cervids, remaining fairly solitary except during the mating season.

The quote above from the answers page “are groups of moose called herds“, to which the answer is yes, but only during mating season – one male herds a group of females.

No image of a Moose herd could be found in the 15 minutes I spent looking. Sorry.

This entry was posted on Thursday, May 5th, 2011 at 11:00 pm and is filed under Language. You can follow any comments to this entry through the RSS 2.0 feed. You can leave a comment, or trackback from your own site.